skip navigation
The Official Home Of The Madison Capitols

Are you new to the sport of hockey? Have you ever wondered why the whistles are blown when they are? This page is your guide to everything from an assist to a Zamboni.

Here you will find various glossaries of terms common to the game. Consider this your cheat sheet to following the greatest game on Earth.

Here you will find other terms and jargon related to hockey. Once again, italicized words have clickable links to examples.

Assist- When a player helps to set up a goal for his team via a pass, deflection, or any other means of playing the puck. There can be up to two assists on a given goal.

Backhander- A shot attempted by a player using the back side of his stick blade.

Blue Line- The two lines separating the offensive/defensive zones from the neutral zone.

Body Check- Body contact by a player in the act of knocking over an opponent or separating him from the puck.

Breakaway- A clear path to the net for an attacking player, unimpeded by any defenders.

Center- Forward position usually responsible for face-offs, as well as patrolling the middle of the ice in all three zones.

Clearing the Puck- On defense, the act of getting the puck out of your defensive zone, forcing the opponent to retreat.

Defenseman- Position where a skater is protecting the area around his net and goaltender, while also serving as an offensive player near his team’s offensive zone blue line.

Deke- A fake by an attacking player using skates, body, or stick to try to confuse a defender and navigate the puck around him.

Empty Net/Extra Attacker- When a team elects to pull a goaltender and sacrifice an open net to have a 6th attacker on the ice, as opposed to 5 skaters and 1 goalie.

Face-Off- After a whistle or a stoppage, the act of two centers jousting for the puck to gain control off the official’s dropping of the puck.

Five-Hole- On a goal, when the puck is shot between the goaltender’s legs.

Freezing the Puck- When a goalie gains control of the puck either in his glove, or underneath his body, a whistle stops play and a faceoff ensues.

Full Strength- When both teams have no players in the penalty box, both teams are skating 5-on-5 (full strength).

Goal- Any time the puck completely crosses the red goal line in behind the goaltender’s crease.

Goaltender- The “last line of defense”, a padded and protected player stationed in front of his team’s goal.

“Gordie Howe Hat Trick”- Named after hockey legend Gordie Howe, this is the distinction of finishing a game with a goal, an assist, and a fight.

Hat Trick- When a player scores three goals in a single game.

Icing (Hybrid)- When a defending team clears the puck down past the opponents’ goal line and wide of the net from behind the center ice red line. Under new hybrid icing rules, a player from the clearing team must beat all opponents to the offensive zone faceoff dot to “cancel” the icing. Icing brings the faceoff back into the clearing team’s defensive zone, and the team that committed the icing cannot change players.

Intermission- A break in the action between periods that doubles as the time for the ice crew to resurface the ice with a Zamboni.

Line Change- When a team substitutes players, either during play action or after a whistle.

Linesman- An official in charge of determining offsides, icing, dropping of the puck, and breaking up altercations.

Neutral Zone- The area between the two blue lines in center ice.

“Off the Post”- Terminology for a shot that beats the goaltender but hits the goal post and stays out of the net.

One-Timer- A slap shot that is taken immediately following a pass from a teammate with no catching or stopping of the puck in between, all in one motion.

Penalty Kill- The act of a team trying to prevent a power play goal by the opponent following a penalty they committed. The team on the penalty kill has fewer skaters on the ice than the opponent (4 on 5, 3 on 5, or 3 on 4)

Point-  (Two meanings): A goal or an assist is considered a point in statistics. “The point” is the area just inside the offensive zone blue line where defensemen on the offensive team are normally positioned.

Puck- The main object of play, a 3-inch wide in diameter by 1-inch thick disk made of vulcanized rubber and frozen prior to games.

Red Line- The line dividing the rink into two halves, it also serves as the line that must be crossed before legally clearing the puck all the way behind the opponents’ goal

Referee- The official in charge of watching gameplay and calling penalties and other infractions during game action.

Save- The act of a goaltender knocking the puck away, catching it, or other means of preventing a clear shot on goal from entering the net.

Screen- When an offensive player stands right in front of the goaltender in hopes of clouding his vision and preventing him from seeing the puck.

Shootout- After overtime is played, if a game remains tied, a shootout commences, in which teams send out three shooters each to take penalty shots. The team that scores the most in 3 rounds wins. If tied after 3 rounds, sudden death commences until a team both scores and prevents an opponent from scoring in the same round.

Shorthanded Goal- A goal scored by a team that is competing with fewer players on the ice than their opponent.

Slap Shot- A shot where a player winds his stick back behind his body, often over his chest and slaps the puck in one swift motion.

Slot- The area in the offensive zone between the two faceoff circles, extending from the top of the crease to the point area.

Tag-Up (Offsides)- If a team is deemed to be offsides but is not touching the puck, the offsides team may retreat out of the offensive zone and then continue pursuing the puck without incurring a whistle.

Top Shelf- A goal that is scored in the top part of the net between the top crossbar and the back support bar at the top of the net.

Trapper- Another term for the goaltender’s catching glove.

Turnover- When a player has a pass intercepted by an opponent or when the puck is taken away off of his own stick.

Wing- Forward position that often roams along the outer thirds of the rink, either on left wing or right wing.

Wrist Shot- A shot where the puck remains in contact with the blade at the release point and is flicked/pushed by a snap of the wrists.

Zamboni- Brand name/recognized term for the ice resurfacing machine that treats the ice between periods.

Boarding- Checking an opponent into the boards when his back is facing the offending player.

Charging- When a player takes multiple strides leading up to heavy body contact, often to the head/neck area.

Delay of game- When a goalie or skater purposely delays the game by means of either purposely shooting the puck out of play, closing a hand on the puck (skaters only), or intentionally knocking the net off of its moorings.

Diving- When a player is deemed to have embellished a fall or other action in an effort to draw a penalty for his team, he may be called for diving, a form of unsportsmanlike conduct.

Double minor- Normally reserved for high sticking infractions where a player's high stick has drawn blood or an injury to an opponent. Incurs a four minute penalty. If an opponent scores within the first two minutes of the penalty, they continue to have two minutes of power play time.

Fighting-A fight between two players, which results in a major penalty for each participant.

Game misconduct- Not to be confused with misconduct, a punishment levied by an official to a player who caused serious harm or injury to an opponent (at the officials' discretion).

Goaltender Interference- the act of an attacking player contacting or impeding a goaltender from being able to play his position. By rule, the goaltender is entitled to his goal crease area at the officials' discretion.

High-sticking- When a player clips an opponent with his stick lifted above his waist (often striking the opponent in the head or neck).

Holding- When a player impedes an opponent’s progress by grabbing him with an arm or hand, or pinning him against the boards.

Hooking- When a player uses the blade of his stick to tug at an opponent’s stick or jersey to impede his progress.

Interference- When a player impedes the progress of an opponent who is not in control of the puck and is pursuing the puck. Can also apply to body checks away from the puck in some instances.

Major- A 5-minute penalty that is called (normally for fighting) for an action that, at the referee's discretion, was an attempt to cause injury to an opponent. Sometimes a major also incurs a game misconduct. For non-fighting majors (i.e. one player commits a major penalty such as boarding), the team that commits the penalty has to skate a man down for the duration of the penalty. The opposing team can also score as many power plays goals as possible during this time, as the offending player is not released upon the scoring of the first power play goal.

Minor- A two-minute infraction for a penalty that did not cause injury but did impede an opponent from making a play. The offending team has to skate one man short during the duration of the opponents' two-minute power play. If a power play goal is scored, the penalized player is immediately released from the penalty box.

Misconduct- A player may be given a misconduct (not to be confused with a game misconduct), which is a 10-minute penalty that does not affect man power (i.e. if a player earns a misconduct while the teams are skating 5 on 5, the game remains 5 on 5 after the penalty begins to be served). Players can receive misconducts at the referees' discretion, often for instigating fights or verbally abusing an opponent or official.

Penalty Shot- When a player is tripped, hooked, or impeded on a breakaway in a way that prevents him from getting a good shot or scoring chance off, he is awarded a penalty shot. The player starts with the puck at center ice and gets a free shot at the goalie, unimpeded.

Roughing- When minor altercations or scuffles, i.e. pushes/shoves, are deemed to not be worthy of a major penalty, a roughing minor may be called.

Slashing- When a player strikes an opponents’ stick, arm, hand, leg, or other body part with a violent swing of his stick.

Tripping- When a player trips an opponent with his stick, skate or any part of his body. When done with a skate, it also is referred to as slew-footing.

Unsportsmanlike Conduct- Any action deemed to be unsportsmanlike or not tolerated on the playing surface. Can range from verbal attacks to diving & throwing objects, among other offenses. 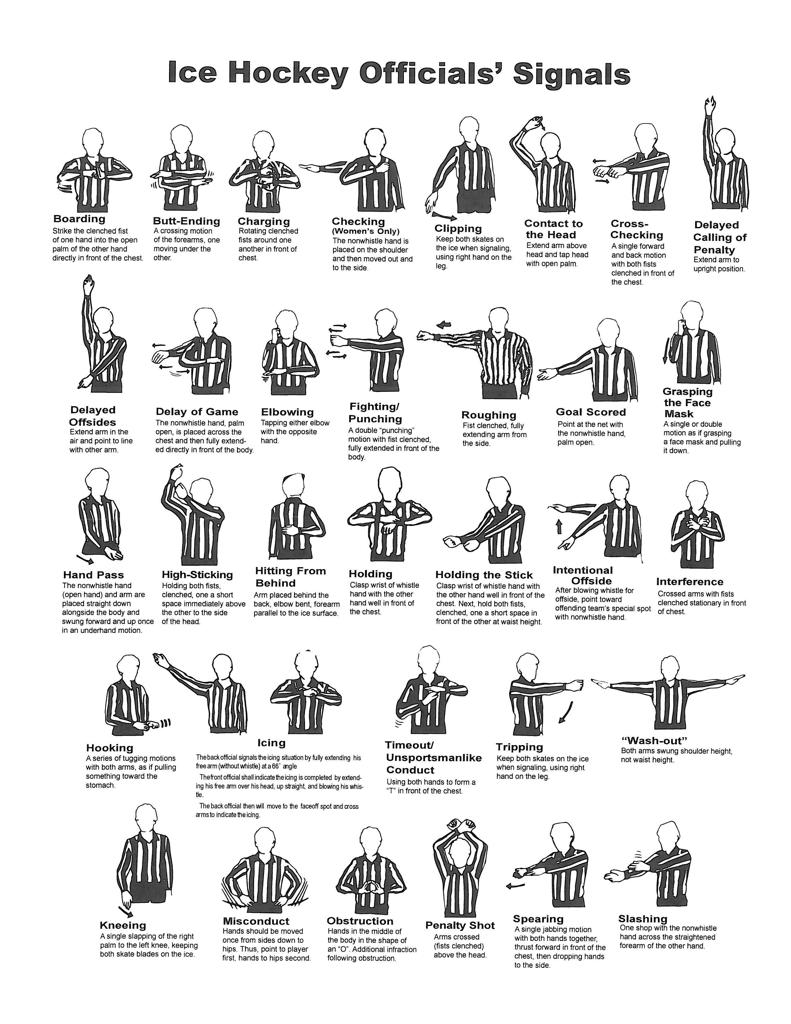